We have for You a new and interesting mini PC called GMKTEC NucBox2 Plus and based on the Intel Core i5-1135G7 processor with an Intel Xe GPU. A low-power chip from Intel with good performance in all areas and which is also supported by 16 GB of DDR4 RAM and a high-speed SSD. Among its ports, the Thunderbolt 4 connector stands out, allowing us to reach speeds through this connector of up to 4 GB per second and to output video in up to 8K at 60 Hz.

In terms of design, the GMKTEC NucBox2 Plus comes with the same case as the GMKTEC KB5 with a simpler processor such as a Celeron N5105. A small computer can be used for a variety of uses both for office automation, web browsing, or multimedia playback, even in 4K resolutions at 60fps as it has power and connectors suitable for this.

This miniPC GMKTEC NucBox2 Plus mounts the popular Intel Core i5-1135G7 processor manufactured in 10 nm and with a consumption of 12 W TPD. A Quad Core chip with eight threads with a maximum speed that reaches up to 4.2 GHz and integrates an Intel Iris Xe G7 GPU with 80 EU, the. We have an active fan that expels air through one of its sides.

This mini PC includes for wireless connectivity Wifi 6 aX with internal antenna and Bluetooth 5.2 (Intel AX201). As for ports we have we find on the perimeter of the case 4 USB 3.2 connectors, with two HDMI 2.0 outputs, a Thunderbolt 4, 3.5 mm audio jack and finally a RJ45 Gigabit network connector.

The power supply is external and 60 W and the operating system included is Windows 11 Pro although any Linux distribution can be used. 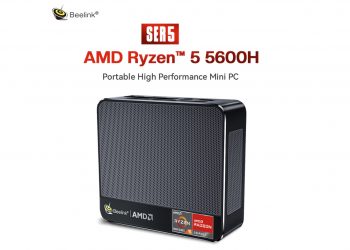